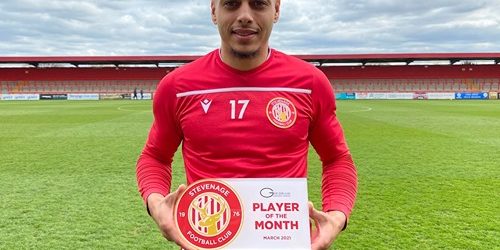 His second in a row and third for the season, Elliott List overcame competition from fellow nominees Chris Lines, Tom Pett and Luke Norris to claim the monthly award.

In a run of games that saw Stevenage win four from six in March, Elliott List’s performances and goals ensured the forward of another successful month in red and white. Goals in home wins over Forest Green, Harrogate Town and Barrow increased his tally to ten for the season – a personal best to date.

Upon receiving the award, Elliott said “I would like to thank everyone who took the time to vote for me this month. It’s great to be recognised but what matters most is picking up those three points on a Saturday. Hopefully we can continue this run of form and hopefully the goals keep coming!”